C-Span footage of Joe Biden interacting with girls is being flagged by Twitter for violating their Child Sexual Exploitation Policy after popping up online during an argument about the politician's character.

Or is Twitter using the flagging to prevent criticism of their chosen candidate?

That’s really funny especially the part where he made up the reason it was removed. The better part is reading that article and realizing there is no confirmation that this happened other than “scout’s honor”. Ooh i said scout. Child exploitation!

Oh and making up two reasons why something happened is not a catch 22.

Yossarian actually explained it to me once

Yup, they’re not even trying to hide it.

How serious should we take your OP when the thumbnail from the video has been widely debunked. 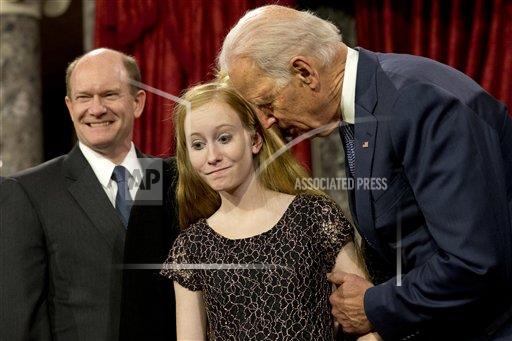 " The image shows Maggie Coons, the daughter of Sen. Chris Coons of Delaware, during her father’s swearing-in ceremony in January 2015.

After the clip went viral, Sen. Coons, a Democrat, told Fox News host Chris Wallace that Biden was simply offering her reassurance and that his daughter didn’t think he was creepy. Coons said that Biden, who held Coons’ Senate seat before resigning to serve as vice president, has known his children their whole lives.

“I could hear him,” Coons said in the interview. “He was leaning forward and whispering some encouragement to her about how, when he was sworn in, his own daughter Ashley was 13 and she felt awkward and uncomfortable.”

It’s not even clever anymore.

Kid sniffer copped a feel here and there and is fhe democrat pick. No wonder his voters want to mail in their ballot.

Kid sniffer copped a feel here and there and is fhe democrat pick. No wonder his voters want to mail in their ballot.

Find me when Biden is on tape admitting sexual assault

Just imagine Biden saying half the crazy ■■■■ Trump has.

The #metoo is no longer alive and well under the big tent democrat circle. Interesting

It hasn’t been “debunked”.