BREAKING: A deal to avoid a govt shutdown has been agreed in principle

They are funding border security just not a wall.

So border security is now stupid. Thanks for that.

@Apocalypto didn’t say border security is now stupid. He said the wall is stupid. And it is. We have the proper amount of barrier in place now. Spending untold billions more is nothing more than a poor ROI at this point. It’s a solution that solves nothing. It’s a bumper sticker campaign slogan. One that was supposed to have been paid for by Mexico.

The Democrats came to an agreement with Republicans on legitimate border security measures that will have a good ROI.

What really needs to be addressed though are businesses like those owned by the President that knowingly employ undocumented, cheap labor. Go after the heart of this issue and we can finally see some real results.

But Republicans don’t want to do that. Much of their power comes from representing constituencies that rely on this cheap undocumented labor. Targeting them would likely result in them losing power so it will never happen.

That is really what this wall issue is all about. A distraction to keep power by riling up a base through dark propaganda and fear, while never having to actually address the reason for illegal immigration. And it clearly is working on the base.

It would be nice if the base would try to think for themselves, and not buy in to the propaganda and fear. One thing is certain, the wall issue is proof positive that propaganda works on a certain segment of the population.

I’m fine with going after business that employ illegals. But also, it needs to be a crime with real repercussions for being in the country illegally. Otherwise they’ll just keep coming and be protected in sanctuary cities and the cycle will never end.

You know a compromise.

k…and what do Ds get…just a reduction in border wall spending?

There is no reduction in spending. This is additional spending.

I’m fine with going after business that employ illegals. But also, it needs to be a crime with real repercussions for being in the country illegally. Otherwise they’ll just keep coming and be protected in sanctuary cities and the cycle will never end.

I’m in complete agreement with you.

But also, it needs to be a crime with real repercussions for being in the country illegally.

What do you suggest the punishment should be?

So how much time should Trump serve for employing illegal aliens?

“Immediate” is not due process which is required by that darned constitution.

I agree with you. Now, correct me if I’m wrong, but I believe that’s the current policy for illegal immigrants (except the dreamers).

We already have as close to immediate deportation as one can get.

And if you want sanctuary cities to end, you have to change federal laws and protect local entities from having legal action being taken against them when they are called on to enforce federal law.

You still fail to understand why sanctuary cities exist…it’s not for the reasons the CEC peddles.

Eminent domain has been used for every road, highway, interstate, pipeline, and rail project in the state plus many more, we’re used to it.

Innured to it, it would seem. Taking of private property for the public good. Nationalizing it, in essence.

Exactly and people will buy into it like it is fools gold. Which i dont really understand…you see they are purposing border security yet you claim they are for open borders…2 plus 2 is zebra in their world

They buy into it because it is all that they hear. There is no distinctly observable reality in that world. Here you have it in the open exactly what Democrats sought and it’s actual policy implementation.

It will not only go unobserved, it will be willfully and aggressively denied.

Do you ignore those people of bash their faces in with facts? I go back and forth

There is no reduction in spending. This is additional spending.

“On this new, so-called compromise, I’m getting details,” said Fox News host Sean Hannity, referring to the tentative agreement reached by a bipartisan conference committee that would allocate roughly $1.375 billion for physical barriers along the U.S.-Mexico border.

“I’m going to tell this tonight and we will get back into this tomorrow,” he continued. “Any Republican that supports this garbage compromise, you will have to explain. Look at this crowd. Look at the country. Look at CBS News, even they say 72 percent of the American people want the heroin to stop, the cartels to stop, the gang members to stop, and those that wish us ill.”

“The crowd”…you mean the ones still chanting “Lock her up!” like trained seals?

Do you ignore those people of bash their faces in with facts? I go back and forth

Exposing people to facts paradoxically causes them to dig in on strongly held beliefs that are contradicted by those facts.

Knowing fat donald, it looks like he’s going to cave. 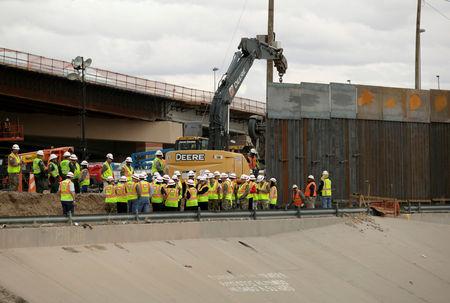 Trump's demand in December for $5.7 billion from Congress to help build a wall on the southern border triggered a 35-day closure of about a quarter of the federal government. Funding for the Department of Homeland Security, the Justice Department...

President Donald Trump has not yet decided whether to back an agreement hammered out by congressional negotiators to avert another partial government shutdown that includes funds for U.S.-Mexican border security but not for his promised wall, the White House said on Tuesday.

“The crowd”…you mean the ones still chanting “Lock her up!” like trained seals?

As much time as the owner of little america hotels.