Maybe they’re not interested in appeasing you or gaining your approval in any way shape or form.

Maybe they’re not interested in appeasing you or gaining your approval in any way shape or form.

They shouldn’t. I ain’t black.

Haven’t quite grasped the concept of BLM yet, have you?

Black Lives Matter (BLM ) is a decentralized political and social movement protesting against incidents of police brutality and all racially motivated violence against black people.

Hmm…Haven’t quite grasped the concept of BLM yet, have you?

Black Lives Matter (BLM ) is a decentralized political and social movement protesting against incidents of police brutality and all racially motivated violence against black people.

Hmmm. You haven’t quite grasped it yet have you. The greatest threat to black people is other black people. And it ain’t even close. Maybe we should do something about this? Blaming white supremacy really isn’t getting it done. Now is it?

If it did, you’d have heard something from them.

His killing was not racially motivated, a key tenet of the BLM movement.

For said Black Life to Matter that Black Life would have had to have died at the hands of a white police officer in an incident where the person Black Lives Matter says actually matters was some how resisting the lawful instructions of the police officer, and in which the facts of the incident could be found later to be different from the original outrage after the incident happened (the man who was shot allegedly without a weapon who later admitted he had a knife for example).

In this case the hero police officer who is now dead, a black man named Cpl. Martinus Mitchum, was himself a police officer and for that reason the thugs at BLM could give a crap.

If BLM actually cared about anything other than cherry picking opportunities to blackmail corporations out of money, burn down a few neighborhoods, and steal some Nike’s and flatscreens (because those businesses have insurance and it’s reparations!) they would be taking leadership in actually standing for black lives, all black lives! Maybe if an organization that really believed Black Lives Matter had been involved in the life of the apparently troubled young black man who shot officer Mitchum, maybe that man namd John Shallerhorn would have gotten some help and attention that could have turned his life around before he started developing a rap sheet. Who is John Shallerhorn? Suspect in killing of New Orleans officer, Biography, Wiki, Age, Net Worth, Family, Twitter, Instagram, Facebook (wikiglobals.com). If BLM really cared about Black Lives BLM would be in places like inner city Chicago where statistics about young black men shooting other young black men are as inevitable as death and taxes. All of us could get behind that…We could recognize this bunch as a legitimate movement worth supporting…Not just as a collection of criminals cherry picking tragedy for the purposes of violence, publicity, and money.

I believe All Lives Matter…BLM is a racist collection of Marxist thugs and the sooner the country rejects these clowns the better.

“BLM doesn’t do what I want them to do.”

That is a very sad story of evil getting the upper hand.

This is a question of life and respect and it is bigger than skin tone.

That is not known.

The officer could have been targeted as a race traitor.

“BLM doesn’t do what I want them to do.”

Black Lives Matter is a Marxist Domestic Terrorist Group. " Reporter Lara Logan made an important point Tuesday morning on Fox & Friends First , saying it’s long past time to expose the “powerful political entities” behind antifa and other violent-protest activists… The establishment media have largely ignored the radical, communist, and even domestic terrorist roots of antifa, Black Lives Matter, and some of the other violent protesters. While the Washington Examiner’s Jerry Dunleavy has done yeoman’s work in reporting on the Leninist-terrorist roots of BLM’s lead organizers, the nation’s big dailies have mentioned only in passing the movement’s backgrounds and financing."

BLM’s Founders are Trained Marxists. " Black Lives Matter co-founder Patrisse Cullors said in a newly surfaced video from 2015 that she and her fellow organizers are “trained Marxists” – making clear their movement’s ideological foundation, according to a report.

Cullors, 36, was the protégé of Eric Mann, former agitator of the Weather Underground domestic terror organization, and spent years absorbing the Marxist-Leninist ideology that shaped her worldview, Breitbart News reported.

“The first thing, I think, is that we actually do have an ideological frame. Myself and Alicia in particular are trained organizers,” she said, referring to BLM co-founder Alicia Garza.

“We are trained Marxists. We are super-versed on, sort of, ideological theories. And I think that what we really tried to do is build a movement that could be utilized by many, many black folk,” Cullors added in the interview with Jared Ball of The Real News Network."

BLM is a Marxist, anti police anti family collection of thugs. BLM and Antifa Riots last summer led to billions in property damage and the deaths of several people, including African Americans. BLM said nothing.

All Lives Matter…BLM is a bunch of racist opportunists.

That is not known.

The officer could have been targeted as a race traitor.

Marxist; yet another word.tbat you don’t understand the meaning of Black law enforcement have found themselves in unique positions this year amid calls for racial justice and changes in policing.

On another sizzling summer day, Michelle Bracken, national president for the National Organization of Black Women in Law Enforcement and an inspector at a federal agency, heard all-too-familiar phrases such as “Uncle Tom,” “sellout” or “traitor” hurled her way as she surveilled protests and protected monuments emblematic of America’s promise and a president who has been accused of thwarting it for Black citizens.

Bracken’s years of workplace racial and gender harassment steeled her, making her impenetrable to insults and thrown rocks any wayward person in a crowd could muster. Her faith in God and her commitment to her job in law enforcement for 31 years outweighed any personal turmoil over the duality of being Black and in uniform.

It is as real as anything.

" Sky News host Paul Murray says the Left media is still saying, despite the fact the Black Lives Matter riots in America caused over a billion dollars of damage, they were “mostly peaceful”. 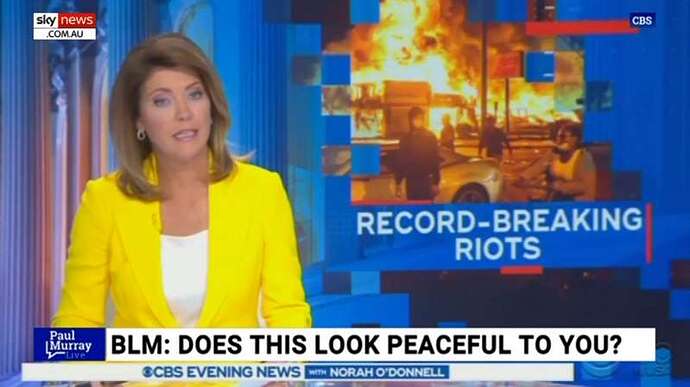 Norah O&#39;Donnell standing in front of a store799×449 36.2 KB
© Provided by Sky News Australia.
“Remember when the old Biden booster network was literally standing in front of a burning building and saying the protests, they’re mostly peaceful?” Mr Murray said…Today we are starting to get the bill back from some of these riots, and … despite the fact that more than a billion dollars of damage has happened, they’re mostly peaceful…It is literally a story about more than a billion dollars’ worth of damage, but you still say mostly peaceful."

From Townhall…“For months Democrats and their allies in the media have claimed Black Lives Matter protests in cities across the country have been “mostly peaceful.” Recently, CNN ran a chyron that stated “fiery but mostly peaceful” as a building in Kenosha, Wisconsin burned to the ground. But contrary to the narrative and according to a new study from Princeton University, over the past four months hundreds of “protests” have turned into violent, destructive riots. Meanwhile, over the weekend in Pittsburgh BLM agitators accosted the black owner of a McDonalds and then vandalized his establishment.” New Study Shows Hundreds of BLM ‘Protests’ Turned Violent by Katie Pavlich (townhall.com)

IMHO Black Lives Matter as we’ve come to know it is simply the biggest lie in America today.

The last line of that story matters…
"Meanwhile, over the weekend in Pittsburgh BLM agitators accosted the black owner of a McDonalds and then vandalized his establishment.” Black Lives Matter to Black Lives Matter as long as either A) the die at the hands of a white cop or B) they play the game the way BLM thinks it should be played.

I’m guessing there are a significant # of Black Lives the Black Lives Matter would just as soon right off because they dare to see things other than racism for fundraising and publicity purposes the way BLM sees it.

It is as real as anything.

His killing was not racially motivated, a key tenet of the BLM movement.

A tenet should be true.

Marxist; yet another word.tbat you don’t understand the meaning of

I don’t particularly care for it because of the evolutions, but that is the sun source of it.