Barr told me that Republican Senate leader Mitch McConnell had been urging him to speak out since mid-November. Publicly, McConnell had said nothing to criticize Trump’s allegations, but he told Barr that Trump’s claims were damaging to the country and to the Republican Party. Trump’s refusal to concede was complicating McConnell’s efforts to ensure that the GOP won the two runoff elections in Georgia scheduled for January 5. Inside William Barr’s Breakup With Trump

In the final months of the administration, the doggedly loyal attorney general finally had enough.

It wasn’t a betrayal.

It was the cold slap of reality Trump needed.

When there is so much more to be talking about.

How soon those on the left forget: 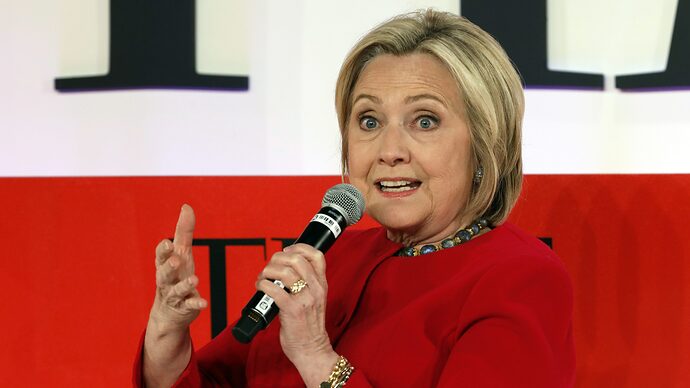 Hillary Clinton suggests election 'stolen' from her, other Dems could suffer...

Hillary Clinton suggested she had the 2016 election “stolen” from her during the latest stop of her slumping speaking tour.

“Suggests”. That’s quite a different scale, doncha think? Did she start a Stop the Steal movement, or have her supporters storm the capitol?

Exactly. What a tabloid rag.

Yes inflation and crime to start with, that’s before you get into the chaos at the border. It’s ok the voters will bring the news.

Exactly. What a tabloid rag.

The Atlantic? Ok if you say so. So Barr will certainly deny it, right?

She had a bigger hand in the FBI.

Her claim was substantiated by the senate intelligence committee in 2020.
https://www.intelligence.senate.gov/publications/report-select-committee-intelligence-united-states-senate-russian-active-measures

I can wait for the audit in Arizona to conclude and listen to what they found after a thorough forensic examination. Enough incidents happened around the country to give credence the election may have been fraudulent but…I can wait to completely make up my mind.

She started four long years of impeachments and investigations that tore the country apart.

She started four long years of impeachments and investigations that tore the country apart.

Hillary Clinton had no power to do that.

I know the leftist can never be to blame for anything.

I know the leftist can never be to blame for anything.

Sure she does. Lots of swampies owe her.

after a thorough forensic examination.

How do you know that it is? Because they said so?

Sure she does. Lots of swampies owe her.

Nope. She is old news.