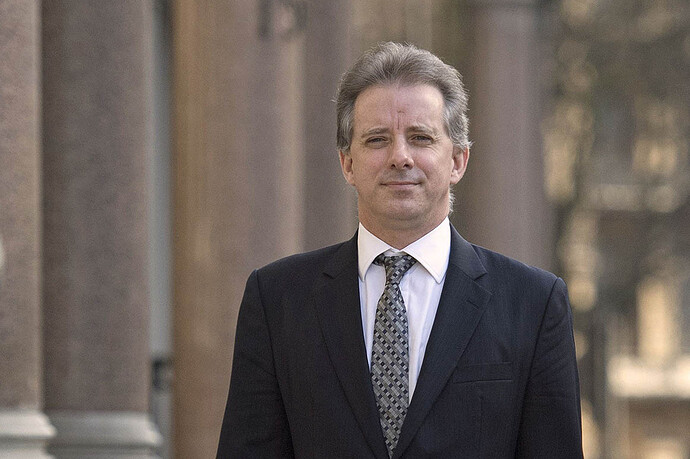 The interview was contentious at first, according to two people familiar with the matter, but investigators ultimately found his testimony credible and even surprising.

Here is an interesting twist on all the right wing commentary about the “phony dossier”. Reuters and Politico are reporting that Christopher Steele was interviewed for sixteen hours by the DOJ team that is investigating the origins of the Russia probe in response to Trump supporter claims that the probe was illegitimate.

The report is that the “interview” started out contentiously but by the end the investigators found Steele to be a credible witness and the information he provided “was not far off.”

If this internal probe fails to demonstrate the existence of an FBI/CIA/Obama/Clinton conspiracy to spy on and defeat Trump, we will have no choice but to call for an investigation into this investigation as well. What else can we do?

That’s a new twist. Of course the dossier was never officially discredited. Right-wing conspiracy theorist media did claim it was discredited early on, but they were alone.

Yeah but did they prove every single word is true? If not we must conclude it’s all part of a deep state attempt to undermine the greatest American of our time

drip, drip, drip or something.

Two people familiar with the matter. What does that even mean?

So this, in your opinion, should be filed under fake news?

How is that relevant to the fact Comey never verified it yet used it to spy?

He lied to the fisa court!

Two people familiar with the matter. What does that even mean?

How is that relevant to the fact Comey never verified it yet used it to spy?

He lied to the fisa court!

How do you know Comey lied to the FISA court?

For those of you playing the hearsay card, this is a really good example of what real hearsay looks like.

So I should reject the plausibility of the story?

Means nothing of the kind. But there is always wishing and hoping.

More details from the OP’s link.

The extensive, two-day interview took place in London while Trump was in Britain for a state visit, the sources said, and delved into Steele’s extensive work on Russian interference efforts globally, his intelligence-collection methods and his findings about Trump campaign adviser Carter Page, who the FBI ultimately surveilled. The FBI’s decision to seek a surveillance warrant against Page — a warrant they applied for and obtained after Page had already left the campaign — is the chief focus of the probe by Horowitz.

The interview was contentious at first, the sources added, but investigators ultimately found Steele’s testimony credible and even surprising. The takeaway has irked some U.S. officials interviewed as part of the probe — they argue that it shouldn’t have taken a foreign national to convince the inspector general that the FBI acted properly in 2016. Steele’s American lawyer was present for the conversation.

I honestly don’t care what you do. I personally don’t give the story any credibility.

Seems like the sources were pretty close to the investigators that were supposedly doing the interrogating.

Why is that? What do you find not plausible?

Read the entire story. Every thing is based on hearsay from two anonymous people who are familiar with the matter.

Means nothing of the kind. But there is always wishing and hoping.

Yes, Trump supporters will continue to wish and hope for this to be fake while continuing to believe the opposite for which there isn’t even hearsay to go off.

Read the entire story. Every thing is based on hearsay from two anonymous people who are familiar with the matter