At what point does political confrontation become stalking?

Donald openly condoned violence against political opponents at his rallies.

But that’s different, because Donald is merely counterpunching against the incivility of the lib mob. Smash mouth is the only political currency they respect.

Deflection. Because he made that oft repeated comment used as justification for two years of rudeness and violence by the left concerning only those who were disrupting his private meetings. In other words, if you are talking about stalking, that was anti stalking, not stalking.

The DC statute says that simply “emotional distress” is enough. Fear is not required. Maryland may have a different definition. The laws were intended to protect women from creeps who follow them around, but the actual statutes are so broad that they cover a huge range of other activity.

Federal and state prosecutors frequently develop novel interpretations of the law in order to get convictions, especially in political cases. For example, federal prosecutors got convictions of state officials for closing roads in New Jersey. The basis of the convictions were federal conspiracy and civil rights laws. Logically the BLM protestors and organizers should be subjected to similar prosecutions for unlawfully blocking interstate highways and other roads during their protests, but somehow prosecutors never bother with pursuing those cases.

Deflection. Because he made that oft repeated comment used as justification for two years of rudeness and violence by the left concerning only those who were disrupting his private meetings. In other words, if you are talking about stalking, that was anti stalking, not stalking.

You miss the point - that the lib mob mentality has promoted and fomented violence against political opponents for decades, and for once a decent man of the right stood up to them and beat them at their own game.

Donald was completely justified in condoning violence, and for more better justifications than you cite here.

I didn’t say that but its a typical tactic of the morally inferior liberals to put words into others mouths.

You just justified using what you would call bush league tactics against your opponents because they did it first.

So yes, you DID say it…you just didn’t use those exact words. Its okay though…we all figured out what you actually meant. Donald Trump is teaching us to look for the deeper meaning of words, since you can’t take what he says at face value anymore.

Yes I’m against it but it had to happen eventually. Its human nature to be pushed just so far without some pushback. When you gin up anger, hatred and mob mentality it becomes a two way street! Liberal Democrats are getting some of their own medicine.

Right on! Lib bullies can’t handle it when a brawler like Donald meets their vile tactics and hurls them back in their cowardly teeth! They’re learning to take their medicine for decades of bullying decent folk now that decent folk have a true champion and patriot on their side. Eat your peas, libs!

God help us if they ever, ever regain power.

Interestingly, state stalking laws have been used to target anti-abortion protesters. No political exemption for them. Here is an example of a conviction in North Carolina from a few years ago: 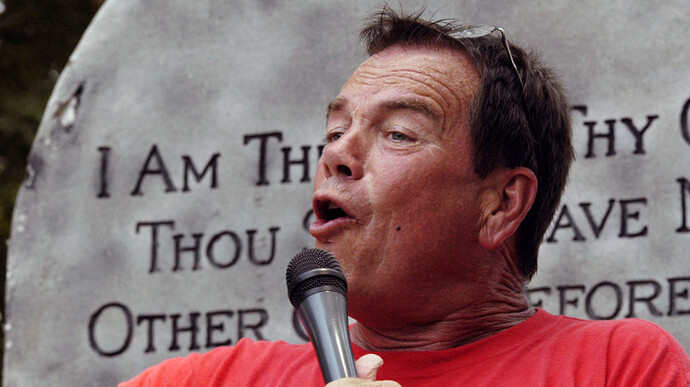 Anti-Abortion Activist Is Convicted Of Stalking

Rev. Flip Benham is best known for making posters with the personal contact information of doctors who perform abortions.

Similar logic should apply to harassment by Antifa or other aggressive protesters on the left.

The doctor who was targetted in that case - the victim of the stalking - was able to demonstrate reasonable fear of death due to Flip Benham’s “Wanted” posters by showing the 4 other abortion doctors who had been targeted with those posters, and then murdered soon after.

Sounds like a legitimate fear to me. Have ANTIFA killed anyone?

Since the 2016, there has been a mass shooting of Republican congressmen by James Hodgkinson, a leftist activist, who yelled “this is for healthcare”. Six congressmen were injured in the attack, one was critical. The toll could have been much higher if the Capitol Police had not been on the scene.

Senator Rand Paul hospitalized with five broken ribs after an attack by neighbor, a registered Democrat. The FBI later said that the attack was politically motivated.

Ok. What do either of those events have to do with ANTIFA?

back in the day we would have just knocked them out… Made them leave on a stretcher.

knowing the context of the last 10 years. im laughing at you

The point is there is no shortage of violence on the left.

The Huff Post had to pull an article calling for the execution of Trump and his supports in the days after the attack against the congressmen. The author, Jason Fuller, still appears on the HuffPost website.

The Huffington Post pulled a piece calling for the "execution" of President Donald Trump published Saturday by contributor Jason Fuller.

Antiabortion activists have been prosecuted using stalking laws based on tactics that the left is now using against its political opponents. Are leftists somehow above the law?

Following someone down the street is peaceable. So is refusing them service in their restaurant.

That article is no longer cached, and I can’t find any evidence of it existing on the Wayback Machine. Until then, I’m not going to address a Gateway Pundit article talking about an article that I can’t actually read.

As for the anti-abortion activist who was charged with stalking - there was a clean, connected line between those specific posters and the murders of abortion doctors.

The vague association of “the left” has no legal meaning.

(b) Exception.- This section does not apply to a peaceable activity intended to express a political view or provide information to others.

The DoctorIsIn in on fire tonight!

Following someone down the street is peaceable. So is refusing them service in their restaurant.

Peacable, if you consider stalking to be peaceable. If you calmly ask them a question, IMO that is rude but passable. If they indicate that they don’t want to talk to you and you keep it up, then that is harassment.

Peacable, if you consider stalking to be peaceable. If you calmly ask them a question, IMO that is rude but passable. If they indicate that they don’t want to talk to you and you keep it up, then that is harassment.

No, it’s not. It’s “petitioning your government”.