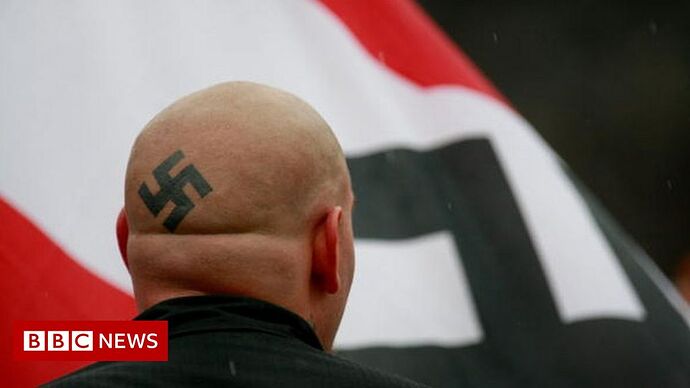 Prosecutors say members of the New Aryan Empire were charged with attempted murder and drug trafficking.

Good news. At least 54 potential drug dealers and murders have been charged. They also evidently get off on intimidating witnesses and roughing people up when they need to.

Looks like they’re be prosecuted using the RICO Act.

What is the significance of their being white supremacists? They’re being prosecuted for offenses like drug trafficking & murder.

While it’s despicable, it isn’t a crime to be a white or any color supremacist.

why do you feel the need to defend white supremacists?

Umm, because they named themselves New Aryan Empire, which is implicitly White Supremacist.

Build the Wall! Around Arkansas. We don’t need those drug dealers, criminals, thugs, murderers, flooding our streets and killing our children.

They are sending us their thugs, their murderers, their drug dealers - and some, I assume, are good people…

I said that while it was despicable, it isn’t illegal under U S law to be one.

Maybe Canadian law doesn’t allow such groups to exist, but U S law does.

Why by acknowledging something exists is it being defended? Abortion, capital punishment and cruelty to animals exist. Am I defending that, too?

Arkansas? Per the linked article, the group formed in one of that state’s jails, making them not average Arkansas residents by the various nature of its origins. Gangs don’t form in other states’ jails?

You seem upset that the media is calling them white supremacists.

Upset? Judo go grab a cup of coffee. You can do better than this.

What I implied was the article’s title was misleading. They aren’t being prosecuted for their beliefs in racial supremacy.

They are being prosecuted by something called the RICO Act for crimes like intimidation of witnesses, drug trafficking and murder. The headline appears to want the reader to believe Arkansas lawmen just decided to infiltrate white supremacists when RICO is Federal & these individuals weren’t wanted for their disgusting ideology.

You’re asking who cares if they are white supremacists. Well, those of us that aren’t racist care because it’s really good to know that they still exist and who they are so we can keep putting pressure on society to not encourage that type of disgusting behavior. I can’t speak for you, so that’s up to you whether you agree or not.

When people organize themselves as a white supremacist group, they aren’t getting together and planning quilting bees, coffee klatches, church outings, community volunteer opportunities.

The fact that someone in this thread is upset because white supremacists are being targeted and exposed is why America is the way it is now. Sad…

When people organize themselves as a white supremacist group, they aren’t getting together and planning quilting bees, coffee klatches, church outings, community volunteer opportunities.

Well, in the old days they were definitely organized in churches.

Why would anyone be upset about ANYONE being targeted for crimes like intimidation of witnesses and murder?

For the final time this group was NOT, as the headline implied, targeted on a state level for their ideology. Ideologies are NOT illegal in the U S.

They were targeted on a federal level for BEHAVIORS that are a crime. I’m disappointed that writers don’t can’t or won’t headline a story for what it is.

No, generally they’re not.

But, unlike the headline implies, there has to be more than belief in an ideology to be pursued.

And these individuals were not, as implied by the headline, targeted on a state level for their beliefs, but for very specific federal offenses.