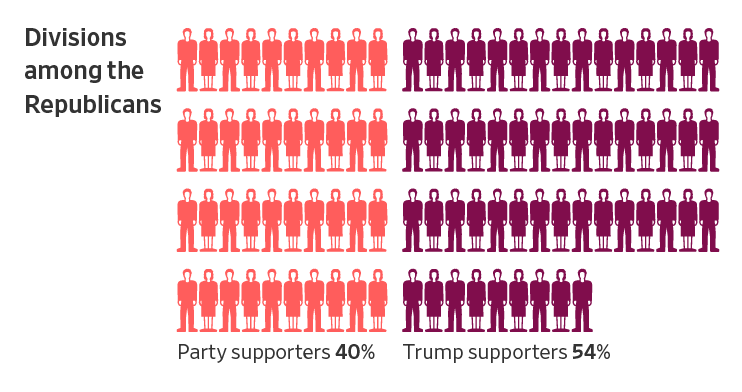 How Trump Unites and Divides Republicans

President Trump wins high approval ratings from Republicans and has unified Democrats in opposition. But the reactions to Mr. Trump are masking important divisions within each party. Wall Street Journal/NBC News polling reveals the voters and...

Interesting article in the WSJ.

Huge divide in the GOP on certain issues.

as if it’s an either-or decision…

Lifelong republican but recently switched to independent after seeing the hypocrisy of the current Republican Party and Trump supporters!

it’s a form of elitism and exclusion… IMHO.

I am a non subscriber and read the link with no problem.

Where have you been? Republicans been hypocrites as long as I can remember.

Trump is a perfect fit of republican party. It is why I endorsed Trump early on.

maybe there is a special deal for liberals…

Interesting article in the WSJ.

Huge divide in the GOP on certain issues.

I can’t read it. Do you mind copying and pasting the deplorable’s description?

According to Trump there are only Trump Republicans or enemies of Trump.

All Republicans are Trump Republicans. He is the party until they kick him out. If they refuse to impeach than he is their albatross in the same way Clinton is ours.

Its like the house dems back in 1865 voting on the 13th amendment.

Most were against but there were a few for it, which pushed it over the top.

Every republican is not a trump republican. All one is has too look at Sasse, Kasich to find the minority.

I accessed it without paying. But I do realize there is a problem.

I am neither R, D or do I belong to any political party. I simply vote from the listed candidates as to who I believe is the least of the evils.

I am neither. I’m a Snow96 republican.

Last election choice came down to The Don or the Criminal Hillary. No brainer.

The Don had done a lot of things I like (cracking down on illegals, taxes, rolling back overzelous regulations for example). He don’t some things I don’t like (revolving door white house, twitter). Some of the revolving door however is because everything The Don does, and everyone associated with him gets put under a microscope by the left wing media. That was NEVER done with Obama. The left wing media did everything possible to make Bamma look like the best thing since sliced bread.

You are a trump Republican?

Its okay that you are.

Here is a nice little test whether you are or not.

Immigration (legal) is a net plus for the United States?

Can’t be answered with simply a yes or no.