Anything interesting down ballot? (2022 edition)

Link to my sample ballot for the General Election, Surry County, North Carolina.

Of course, the headline race is Budd v Beasley, with both Libertarian and Green Party candidates who could be consequential in what is proving to be a close race.

Down ballot, the races of most import are the two Supreme Court Associate Justice races. Both seats have Democratic incumbents. One incumbent is barred by age limits from running again, the incumbent is running in the other race. If Republicans can win either one of these races, they will flip the court, which has been a major nemesis to them.

There are also four partisan Court of Appeals races.

My State Senate and State Representative choices each consist of one Republican and nobody else.

Not sure why some States feel the need to put uncontested races on the ballot.

Three District Judge races, a District Attorney race, Clerk of Superior Court race and a Sheriff race, all featuring one Republican and nobody else.

Three Board of County Commissioner races and some Surry County School Board races, a couple featuring a Democratic opponent. Well, they can dream, can’t they.

So election night, pretty much will be concentrating on the U.S. Senate race and the Supreme Court races. Everything local was decided in the primary.

I do know that quite a number of the States have major ballot initiatives on a wide variety of topics, so include those here. 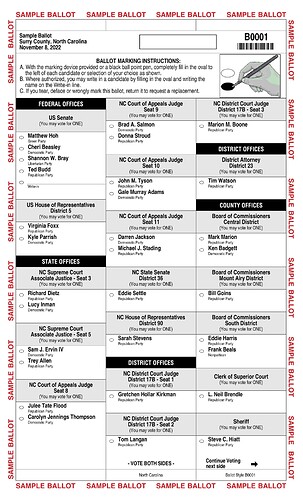 Thanks for the head up. I’ll keep that in mind when I vote.

Lets see what Texas has to offer.

Sample ballot is from Austin County.

And here is a sample ballot from Miami-Dade County, Florida.

Non-federal down ballot includes Governor/Lt Governor, Attorney General, Chief Financial Officer and Commissioner of Agriculture. State Senators and State Representatives. Five of the seven Supreme Court Justices are up for retention, as are numerous District Court of Appeals Judges.

Finally three Constitutional Amendments, but none are of general interest.

like you i’m in NC, and like you its all about the Senate and the NC SC. Unlike you i live in the 12th. its so competitive last time Alma Adams ran unopposed. there is a sacrificial republican on the ballot.