Anyone support martial law and a new election? These people do

Just taking the temperature of Republicans here to see where we are: 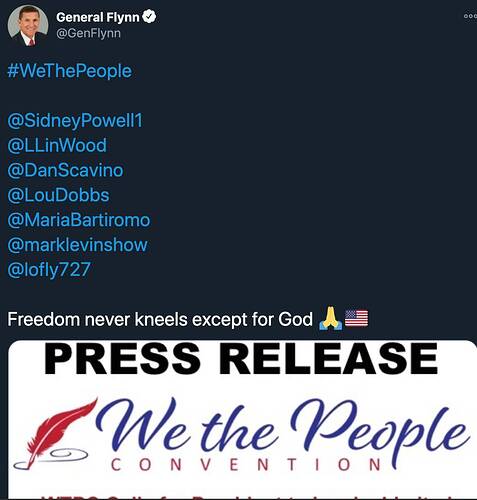 Their lengthy, rambling, multi-fonted manifesto cites Abraham Lincoln’s violations of the constitution approvingly as analogous precedents to the current situation.They demand that President Trump “invoke limited Martial law in order to allow the U.S. Military to oversee a new free and fair federal election if Legislators, Courts and the Congress do not follow the Constitution.”

It’s also been circulating on my FB feed, with a level of approval that’s a little surprising to me (okay, no, it’s not surprising).

Anyone think this is a good idea? Hey, it might really make the libs cry! We the People Convention Calls on Trump to Invoke Limited Martial Law to have military conduct a national re-vote...

13 posts were merged into an existing topic: 2020 Election Fraud Thread

2 posts were merged into an existing topic: 2020 Election Fraud Thread

While we all wait for legal proceedings to play out across the country, please take a look at vote #'s for Georgia below. Also note that Michigan currently has both a contested Presidential and Senate race too. Finally add Wisconsin and Pennsylvania that combined with Georgia and Michigan make up a select group of the ONLY FOUR STATES in the United States individually each where Biden got more votes than both Clinton & Obama did in 2016 and 2012, respectively. Here is just Georgia : Current …