What are the odds of soldiers family being in insurgency anyhow ?

After reading this thread along with the Uvalde thread I have noticed something. The majority of posters from the left are laser focused on the gun used, how he was able to legally obtain it, etc. So their general response has been we need more gun laws, more restrictions on what guns would be available for purchase, etc.

From our posters on the right I have noticed that many are focused not on the gun, when it was purchased, etc but more on the individual himself, his mental health history, etc and why nobody appears to have told someone such as the police or school authorities of his previous behaviors that indicated a troubled young man. I ALSO noticed that when someone on the right made suggestions to address the red flags this individual was displaying, the replies from our posters from the left came up with every excuse they could think of to discredit any ideas to address the “why’s” but were only laser focused on the “hows”. This tells me the left in general doesn’t want to actually try to address the reasons these individuals think killing is the only answer. All the left wants to do is disarm us, every single time something like this happens it is the same thing, misinformed stayements, distortions of facts, etc with only one goal. That goal is NOT to figure out the “why’s”, but to focus on the “hows”.

I am not a sociologist, I am not the smartest person here, but, even I can see that this is a societal problem and until that is addressed this kind of crap will continue to happen.

Now expecting pain free recovery from any surgery is unrealistic, but expecting access to effective pain management drugs is not.

If ordered to fire on American Civilians, some members of the military would, and some would not. Therein lies the blueprint for the 2nd. Civil War as those that would not defend against those that would.

Now expecting pain free recovery from any surgery is unrealistic, but expecting access to effective pain management drugs is not.

I’m not sure what you are trying to address here.

You started down this path in response to this. Explain the thought process, because I’m simply not following here:

Why is this one different from those in Chicago?

I drove through Tulsa yesterday. I really liked those giant pipes that hold up the signs over the turnpike. Tons of lights along the road too. Tolls were stupid though. Way more expensive than I remember.

Thanks, been bothering me for quite a while

nO It dUh PEw peW!

“Or likely (a year from now) we’ll find out he wanted excess prescriptions for narcotics.”

No, I don’t believe there’s any justification for ending any of those lives. I wonder, though, if restrictive scripts for pain management are part of the problem.

Marijuana isn’t legal in all of the U S. Lack of adequate pain management not only affects morale, but can delay that recovery process.

Should have told me.

Next time. Gotta drive east today into Illinois. Paramotor season is upon us!!

Until the “why” is addressed, there will be violence, regardless of the “how”.

Remove the guns, and the stabbings will increase exponentially. Good luck getting rid of shivs.

In China, which has strict gun regulations—in fact, it’s one of a few countries in which firearms are illegal to own privately in most cases—knife attacks are not uncommon. The number of attacks per year is not clear but attacks are regularly reported in the media, showing that efforts to regulate the purchase of knives or punish the attackers have been unsuccessful in deterring the violence. One of the more notorious knife attacks in Asia occurred in 2014, when a group of eight men and women wielding long-bladed knives attacked patrons at a Kunming train station, injuring more than 140 people and resulting in 29 civilian deaths.

Knife violence in Asia is not exclusive to China. In Japan’s 2016 Sagamihara stabbings, a knife-wielding former employee killed 19 people and injured 26 more at a care home for the disabled. Later, in 2019, the Kawasaki stabbings resulted in the deaths of three people (including the stabber) and the injury of 18 more. Knife attacks in South Korea include the Nonhyeon-dong massacre, a 2008 event in which an attacker used a sashimi knife to kill six people and injure seven more.

In this hypothetical, the stakes would be way higher since war would be in our own home, not some 3rd world ■■■■■■■■■

Precisely. If weren’t willing to rubblize mud hut compounds in AStan, who would flatten a city block in Denver?

Would it really come to flattening city blocks ? Aren’t there more precise ways to fight insurgency ?

“Or likely (a year from now) we’ll find out he wanted excess prescriptions for narcotics.”

No, I don’t believe there’s any justification for ending any of those lives. I wonder, though, if restrictive scripts for pain management are part of the problem.

Thanks. Now I get where you’re coming from.

In fact, they are such effective weapons that the military in those countries are issued knives instead of guns.

Why are there no women mass shooters?

There was another mass shooting in Philadelphia last night.

No it won’t. Time for that talking point to die. It’s not 1789 anymore 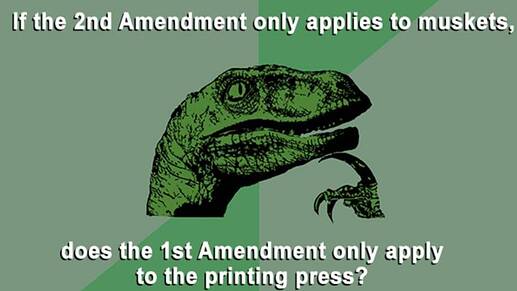 The left also doesn’t seem to want to focus on criminals who couldn’t care less about gun laws. The law abiding are the easy targets so someone somewhere feels like they made a difference.

If someone breaks into “your home” an intends to kill you and your family, I’d want a gun available to save lives. I suppose those on the left would be okay with sacrificing themselves and their families because guns are bad!

Not everyone chooses to be a sitting duck. That others would impose that so the criminals can run rampant is really beyond the pale of stupidity.

Tulsa is my home and I love this city dearly. It saddens me that something like this happened here. Bad apples can be anywhere I guess.