9 year old girl was detained by border officer for being illegal despite having proper paperwork on her proving her citizenship.

Though she’s an American, Medina’s family lives in Tijuana, and they cross the border each morning to get to school. On a Monday morning, CBP detained her and her 14-year-old brother, Oscar, saying she didn’t look like the photo in her passport, according to NBC San Diego. CBP said the elementary student, who was questioned without her parents present, “provided inconsistent information during her inspection.” The agency reportedly had no explanation for why it took 32 hours to confirm her citizenship and release her, though in that time they accused her brother, who is also a U.S. citizen, of human smuggling and tried to have him sign a document saying his sister was his cousin. Medina was finally released after her mother pleaded with the Mexican consulate to contact U.S. immigration authorities. 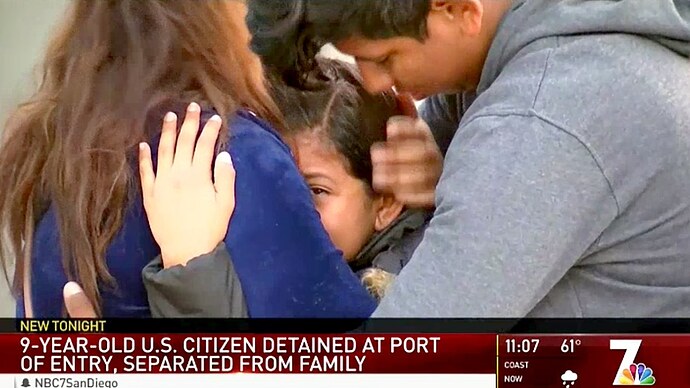 Border Patrol Detained a 9-Year-Old American Girl on Her Way to School for 32...

It's another case of a U.S. citizen being held by federal law enforcement agencies despite having the proper paperwork.

How many of us walked around with proof of citizenship as 9 year olds? How many conservative parents here would be fine with their 4th grade daughter spending almost a day and a half locked up for no reason or their teenage son accused of committing multiple crimes just for walking his sister to school?

I would ask you then to be mindful the next time someone mentions the very real phenomena of white privilege.

The part that gets me was the " tried to have him [the 14 year old brother] sign a document saying his sister was his cousin".

They ignore the proper ID that she had, but are willing to act on what they coerce a 14 year old to sign.

how many other families have been separated by this tactic.

Too many or not enough depending on who you ask.

I must admit, that I wish they would do the same to me so I can sue the living ■■■■ out of them afterwards.

“Inconsistent Information” can and should raise suspicion.

Too bad, she had to drink water from the toilet while detained.

It takes over 30 hours to deterime if a passport is real or not?

Probably bureaucracy and understaffing and lack of funding.

30 hours is slightly over one day and that’s not long considering it takes 6 to 8 weeks to get a passport.

Trying to enforce our laws.
However, if Congress wishes to provide more funding for our border safety to increase training and hire the best people, it may be worth it.
Otherwise, people who cross the border regularly may be at risk of being temporarily stopped.

According to the New York Times article, CBP agents were following protocols to protect children that are potential victims of human smuggling and sex trafficking of minors. Seems like a reasonable protocol But 30 hours is excessive.

The flipside of this scenario would be a story where a nine-year-old girl was found dead as a victim of sex trafficking and people will be outraged wondering how she was smuggled into the country. There is a reason these protocols exist when minors present themselves and their statements don’t add up. 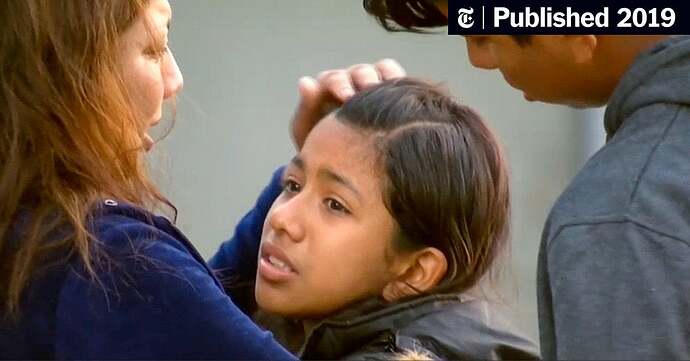 9-Year-Old Girl Was Detained at Border for 30 Hours Despite Being a U.S....

A government spokesman said the girl had “provided inconsistent information” while crossing during her daily commute to school and was detained while her identity was verified.

A federal official with knowledge of the case who was not authorized to speak about it said the 9-year-old had provided inaccurate information to border agents, which prompted a series of protocols that agents were required to conduct. The need to go through that process and ensure that the girl was not a victim of human trafficking contributed to the length of her detainment, the official said.

“C.B.P. prioritizes the safety of the minors we encounter,” he said. “It’s important that C.B.P. officials positively confirm the identity of a child traveling without a parent or legal guardian.”

Her passport pictures does look significantly different than her current look. 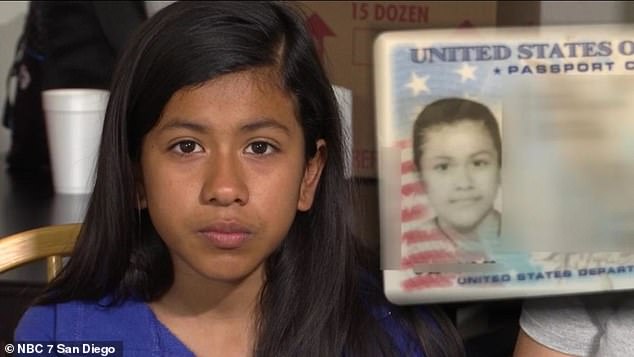 Probably bureaucracy and understaffing and lack of funding.

She’s American. It should take 2 minutes

She’s American. It should take 2 minutes

Look up her records? Birth…etc…its 2019 we have the internet.

It took me 4 hours to get an expedited passport. Holding her for 30 hours is crap