You know we can all see lower places on that chart right?

Lordy- most states are changing the restrictions in March. Extrapolate.

massive losses in the mids.

Agreed. Have for a while. Though the senate looks more in question as of late. The House will undoubtedly shift to republican control.

Though the senate looks more in question as of late.

I would give the GOP a slight chance to get 51 and retake the senate - maybe 55-60 % chance. But GOP Gov Hogan in Maryland declined the chance to run there and flip it red. Likely because he is considered a squishy RINO and traitors arent allowed right now. Same with Ducey in Arizona - not kissing the ring. Those were strong contenders for the Senate. But I still think the GOP are slight favorites for retaking the Senate. 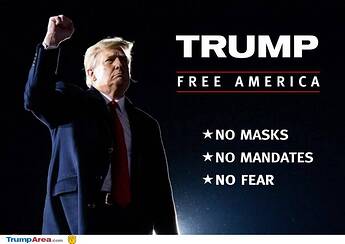 Of course Trump may bail you out.

Of course Trump may bail you out.

You better hope Trump doesnt run. And its not just if he wins the primary. Its if he even tries to contend in 24. He will cry like a little baby and cleave the party in two if he then goes on to lose the primary.

Better hope he gets interested in other things. And I say that as someone who recognizes loads of problems on the democrat side.

The most damaging campaign rhetoric was the virus in 2020.

Just look where the 2 weeks to slow the spread is now.

Canada had to take to the streets to end the mandates with 80-80% vaccination rate. CNN stopped counting, so the Free Beacon is picking up the slack.

This is Hogan- the governor that might have given you another senate seat in Maryland but is too “anti-Trump” to be allowed. He reiterates some of the things you said on the other thread about problems in the GOP.

Republican Gov. Larry Hogan of Maryland criticized his party Sunday for being “focused on the wrong things,” saying its preoccupation with the results of the 2020 election is holding it back from having “a positive, hopeful vision for America.”

The comments from Hogan, a moderate Republican who frequently speaks out against his party and former President Donald Trump, come days after he declined to be a candidate for US Senate, disappointing GOP leaders who saw him as the party’s best shot at ousting one of the state’s incumbent Democratic senators.

“I think they’re, you know, sometimes focused on the wrong things. Not just being a roadblock to Biden. I mean there are certain things we want to stand up to President Biden. The inflation is out of control and we’re talking about billions in more spending – trillions of more spending,” Hogan told CNN’s Jake Tapper on “State of the Union.”

“We want to make sure that we do stand up and speak out. But I’m concerned that they’re focusing too much on looking at the past and trying to relitigate the last election and arguing about things instead of having a positive, hopeful vision for America,” he added.

This is Hogan- the governor that might have given you another senate seat in Maryland but is too “anti-Trump” to be allowed.

It’s a convenient trope to pretend what’s “allowed”, but the voters determine that.

The guy should run. The voters should speak. If the voters don’t “allow” someone to win, that’s the way it’s supposed to work.